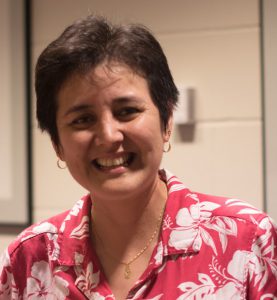 Jenny Gavilanez-Slone, originally from Ecuador, is currently in the DPM Program in the Department of Entomology and Nematology, and is working on a project with Dr. Henri Herrera at Escuela Superior Politecnica de Chimborazo (ESPOCH), studying and characterizing the tropical fire ant Solenopsis geminata (Hymenoptera: Formicidae) that was introduced and became invasive in the Galápagos Islands from Ecuador. Her main goal will be to develop a biological control strategy using decapitating phorid flies as part of an IPM program for this ant in the Galapagos Islands. Jenny has worked in the Imported Fire Ant and Household Insect Unit at the Center for Medical, Agricultural, and Veterinary Entomology (USDA-ARS-CMAVE) since 2011. She has been involved with rearing decapitating flies for tropical fire ants since 2013. Jenny’s strong suit is insect rearing and developing insect diets. She has had the opportunity to work with several systems like green lacewings and its rearing host Angoumois grain moth at Zamorano University, spined soldier Bug at Purdue University, Caribbean fruit fly, tobacco bud worm, small hive beetle and drosophila fruit flies at USDA, Bark beetles and parasitoids with the US Forest Service, and Pink Hibiscus mealybug community and Cactus moth at Florida Division of Plant Industry. In her free time, she enjoys watching movies or sitcoms with her family, and looks after her honey bees and fruit trees in her backyard. Jenny earned her MS degree in the Entomology Department at Oregon State University. She also holds BS and AS degrees in the areas of Biotechnology (Santa Fe College – SFC), Medical Science (SFC), Plant Protection (Zamorano) and General Agriculture (Zamorano). Jenny is a native Spanish speaker, and finds this an important asset to communicate with both Spanish and English speaking scientists and workers.